It has been re-proposed, after several years of absence, the summer tennis tournament on the clay courts of via Rododendri, tournament reserved for the 3rd male categories, 4^ + No.C.. The tournament, named "1st Tournament Cassa Rurale di Fiemme", had performance from 13 al 21 July and saw the participation of 48 athletes from all over northern Italy.

The success in the main draw went to the irreducible veteran of coach Trento Lorenzo Loro who respected with extreme authority the role of main favorite of the tournament directed by the referee Gianluigi Personi. They kept their club mate Alessandro Duca at a distance in the semifinals (62 62) and therefore imposed its regularity on the home tennis player Elia Eccher (62 63), which previously had made his derby with Stephen N (63 75). The race reserved for fourth category ended with the victory of Bijay Piraino, 16enne Bishop of circolo milanese La Pineta. Piraino has finalist our champion Christian Deville, surrendered to the distance after a brilliant start (36 63 61). Christian had become the protagonist in the semifinals of a nice positive with the tennis player Milan Gabriele Trevisan, also a member of ct Predazzo. The event ended Sunday, 21 July with finals, the awards and a rich buffet offered by the Club. A heartfelt tribute goes to the Cassa Rurale di Fiemme, the main sponsor of the event. In addition, a big thank you for the smooth running of the event goes to the manager of the Bar at the Tennis Mauro Perencin and to the referee judge, as well as secretary of the club, Gianluca Persons.

Summer activity to act as final outline of the circle, does. 19 August to 3 September 2013, the social tournament took place, who saw the confrontation of shareholders at the tennis courts Tennis Club. More than for the technical contents, the tournament is pleasantly remembered for the numerous participation, the friendly atmosphere and the moments of aggregation that accompanied the weeks of development. The victory in tournament A went to Elia Eccher, vice-president of the club, who got the better of Stefano Narduzzi, other member of the board, at the end of a hard-fought final tie-break (3/6 – 6/4 – 7/5). In Tournament B, in which the non-classified participated, the victory went with merit to Alberta Bosin who defeated Sergio Morandi in the final, unfortunately affected by an injury during the game. The event ended happily with the final dinner, which saw the participation of numerous members, and with the awards of the participants. A heartfelt thanks go to all the sponsors as well as to Mauro Perencin who actively contributed to the organization and conduct of the event. 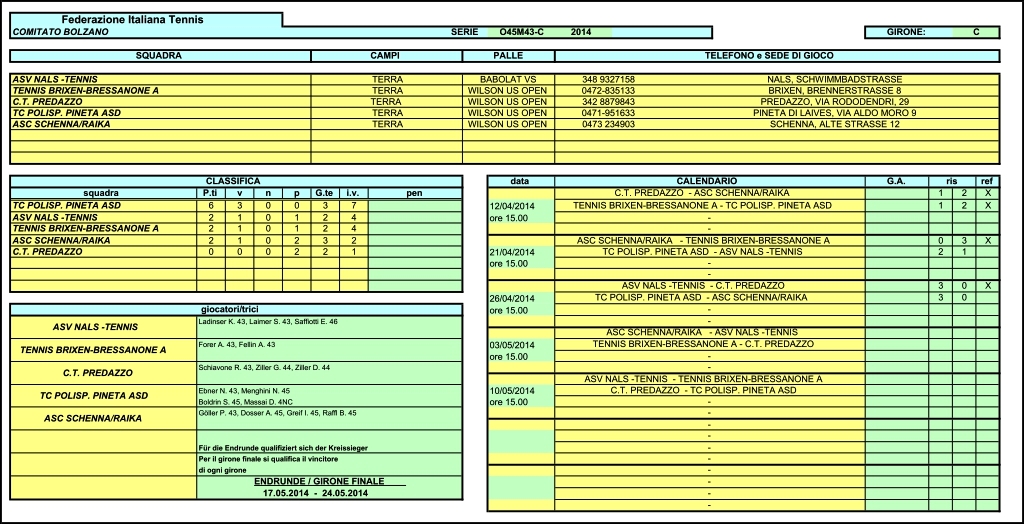 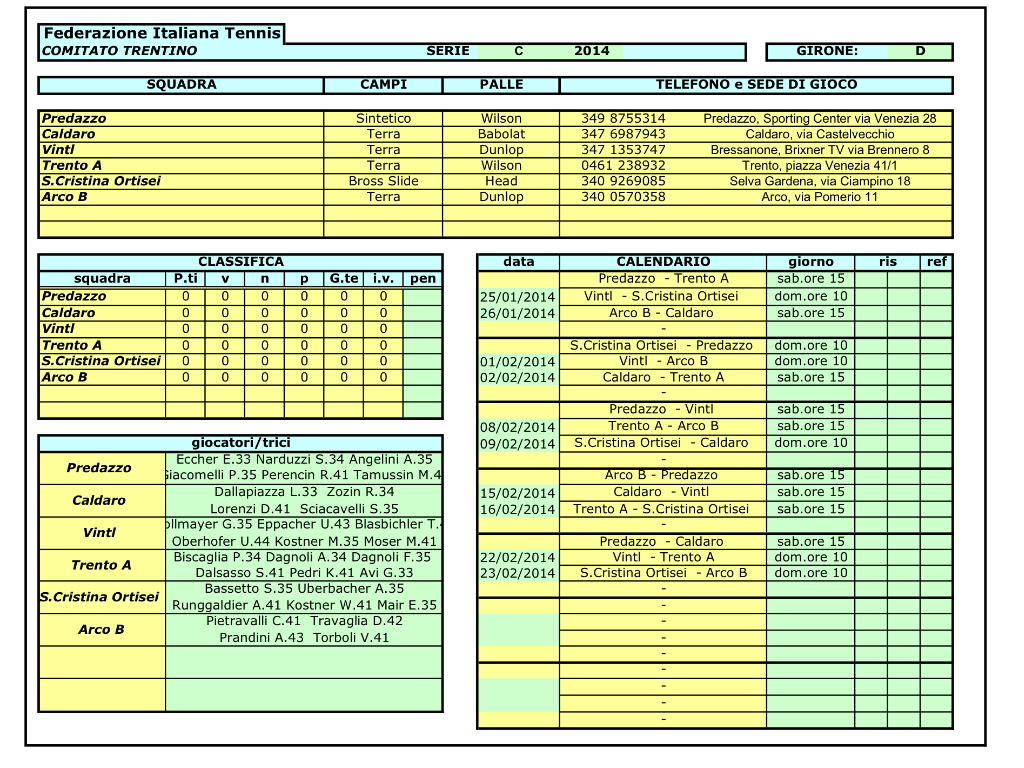 Before team competition of the season 2013. The team of circle, composed by E Elia, Nabi Stefano, Paolo Giacomelli, Abdul Antonio, Vaia, And.... participated in the "Serie C" obtaining an excellent third place in the group behind two South Tyrolean teams, Brixen and Parcines. This did not allow access to the final stages but the result was certainly positive. The club thanks Stefany and Carola who have come on loan from other clubs to set up the team.

Three men's teams have been signed up, a participant in the D1 series and two to the D4 series, and a women's team participating in the D3 series. Satisfaction on the part of the Club especially for the inclusion of the women's team, absent from any season. 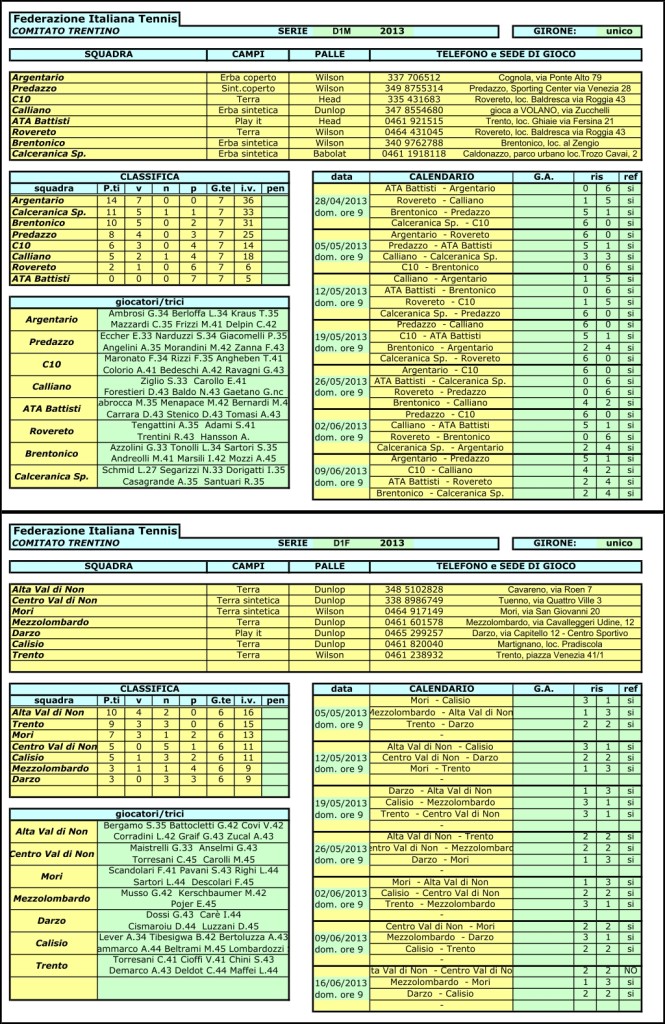 the men's team participating in the D1 series and comprises E Elia, Nabi Stefano, Abdul Antonio, Gicomelli Paul, Morandini Maximum, Morandini Michele, Francis Fang, got a satisfactory fourth place in their group behind Argentario, Calceranica and Brentonico. The result was in line with expectations.

MEN'S TEAM Of D4 "PREDAZZO To": the men's team "Predazzo to", composed by Ziller Giorgio, Ziller Lorenzo, Morandi Sergio, Schiavone Rocco, Davide Schiavone, He participated in the D4 series getting a satisfying fifth place in Group F. The result was in line with expectations. Satisfaction on the part of the circle to the fact that young Lorenzo and David played great matches.

the men's team "Predazzo B", composed by G David, Allan James, Pärtel Demis, Bansal Stefano, Bruno S Federico, He participated in the D4 series getting a satisfying fifth place in Group D. The result was in line with expectations. Satisfaction on the part of the circle for the draw in the derby against CT Cavalese, more team listed.

the "pink" team, composed by Marianna Tamussin, Daniela Giacomelli, Cassidy Chacon, Daniel Sara, attended the D3 series getting a strong second place in Group B. The team went on the ride into the playoffs by getting an astonishing but well deserved promotion in the top series! Good girls! Keep it up!